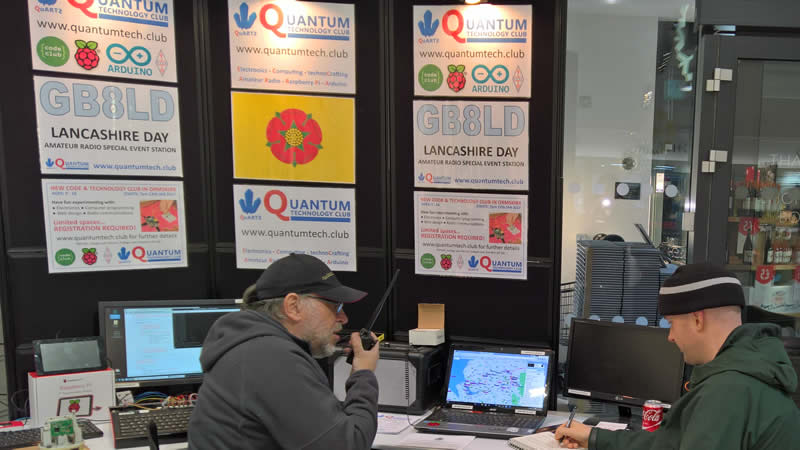 On November 27th, Lancashire Day, Lancastrians celebrate all that is great about their amazing county and toast Her Majesty the Queen, the Duke of Lancaster. This year the Quantum Technology Club established an Amateur Radio special event station using the callsign GB8LD. During the event they promoted Lancashire Day throughout the “real” county of Lancashire; that’s the original county that includes great towns and cities like Liverpool, Manchester, Southport, Bolton, Wigan and the southern end of what is now known as Cumbria.

You can view all of the stations that were worked on the GB8LD on-line logbook. Please do visit it to see if your contacted is listed.

All the stations worked received an eQSL card. If you don’t have an eQSL account then pop over there, set up an account and get all the other QSL cards that are waiting for you too.

GB8LD at Booths in Burscough

In 2016 the station was run in the Booths Supermarket in Burscough where the management and staff were very helpful and accommodating.They gave us a corner of the store right next to the main entrance so we had lots of interest in what we were doing.

Unfortunately there was nowhere we could get a feeder cable out of the building to the antenna so we had to come up with a novel way of operating the station. That solution proved to be a handheld on the 70cm band in the store and a Yaesu FT-8900 out in the car park attached to a mag-mount antenna. The Yaesu and Barry (G4HDU) did a great job cross-band repeating our signal on to the 2m band.

Saturday was cold, very cold, but Barry did a sterling job out in the car park in his shorts and shirt sleeves – he likes the great outdoors. Meanwhile, Derek (G7LFC) and Paul (M0SET), on Saturday, and Derek and William (M6WIQ) operted from the relative warmth of the store and amassed 46 good quality contacts over the two days; being heard over in the Isle of Man and working down into Telford – not bad for a mag-mount installation.

Thanks to everyone who made the event worthwhile – and a great thanks to Booths for their hospitality.

This website uses cookies to improve your experience while you navigate through the website. Out of these, the cookies that are categorized as necessary are stored on your browser as they are essential for the working of basic functionalities of the website. We also use third-party cookies that help us analyze and understand how you use this website. These cookies will be stored in your browser only with your consent. You also have the option to opt-out of these cookies. But opting out of some of these cookies may affect your browsing experience.
Necessary Always Enabled
Necessary cookies are absolutely essential for the website to function properly. This category only includes cookies that ensures basic functionalities and security features of the website. These cookies do not store any personal information.
Non-necessary
Any cookies that may not be particularly necessary for the website to function and is used specifically to collect user personal data via analytics, ads, other embedded contents are termed as non-necessary cookies. It is mandatory to procure user consent prior to running these cookies on your website.
SAVE & ACCEPT