Rebecca Hughes (amateur radio callsign M6BUB) is an active member of the Quantum Technology Club. However, she is also a member of the Radio Society of Great Britain’s (RSGB’s) Youth Committee. One of the their main focuses for the last eighteen months has been the organisation of this years Youngsters on the Air 2017 (YOTA 2017) event.

YOTA is as annual event which young licensed amateur radio operators from throughout Region 1 (Europe, Africa, Middle East and Northern Asia) attend for a summer camp in a different country each year. This year it is the UK’s turn to host the event and the RSGB’s Youth Committee has played a major role in organising activities for the young folk to enjoy.

YOTA a multinational and multicultural event

In previous year YOTA has been held in Austria, Belgium & the Netherlands, Estonia, Finland and Italy. This year 80 young people will attend from 30 countries, including one group from as far afield as Japan. They will take part in a mixture of amateur radio, technical and multicultural activities at Gilwell Park, one of the Scouts‘ largest camping and activity centres in the UK.

Those attending will take part in a number of exciting and interesting activities, including… 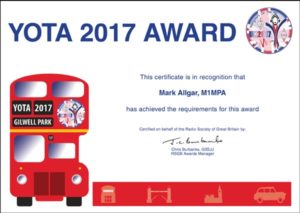 Helping out at YOTA 2017 will be supported by several local amateur radio clubs and members of Gilwell Park’s own Radio Scouting leaders. Together they will be operating an amateur radio special event station using the callsign GB17YOTA.

If you make contact with the YOTA station three times on three different bands (any mode) then you can apply for the YOTA 2017 award.

This website uses cookies to improve your experience while you navigate through the website. Out of these, the cookies that are categorized as necessary are stored on your browser as they are essential for the working of basic functionalities of the website. We also use third-party cookies that help us analyze and understand how you use this website. These cookies will be stored in your browser only with your consent. You also have the option to opt-out of these cookies. But opting out of some of these cookies may affect your browsing experience.
Necessary Always Enabled
Necessary cookies are absolutely essential for the website to function properly. This category only includes cookies that ensures basic functionalities and security features of the website. These cookies do not store any personal information.
Non-necessary
Any cookies that may not be particularly necessary for the website to function and is used specifically to collect user personal data via analytics, ads, other embedded contents are termed as non-necessary cookies. It is mandatory to procure user consent prior to running these cookies on your website.
SAVE & ACCEPT